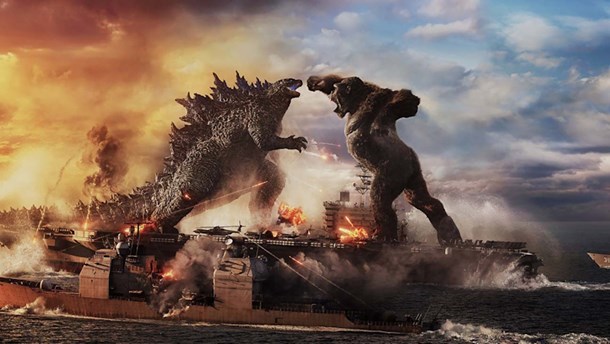 
This review will discuss major spoilers for Godzilla vs Kong, so if you've yet to see the film, back away now. If you have, or simply don't care, then read on...

I hide from no man my love for the current Monsterverse. Yes, it's cheesy and has flaws, but for pure spectacle they simply can't be beaten. Clearly Kong: Skull Island is a highlight of the Warner films, but my personal favourite is still King of the Monsters for all it's visual splendour, varied kaiju design and genuine moments of breathtaking awe at the scale of the creatures.

Of course, the one ingredient lacking in King of Monsters was the big ape himself, explained away in the novelisation by Kong being the only Kaiju smart enough to ignore Ghidorah's call. However, you can't delay the inevitable, and now the two remaining franchise Alphas are thrown together for a film that's been promoted like a title fight - the "Thrilla with Gorilla", if you will...

We begin with Kong on Skull Island, or at least what's left of it. Battered by storms, Titan specialists Monarch have managed to create a dome habitat on the island to keep Kong happy, but it's clear that Kong isn't buying it and decides to smash the Truman Show-esque dome with a handy tree. He's a grumpy monkey, placated only by the last of the tribe we met in Kong: Skull Island, who were reportedly wiped out by the storms. Jia, played by deaf actress Kaylee Hottle, is able to speak with Kong and shares a special bond with him. What's notable about her character is the incredible sound engineering that kicks in when we switch to her point of view - everything is muted and muddled, and it gives an extra insight into her character. She probably makes the most impact of all the actors here, which is especially impressive given her age.

Kaylee Hottle is the standout as Skull Island native Jia

Skipping to the US, a company called Apex (bit on the nose...) is attacked by Godzilla, who gets a great entrance as his fins slice through the water, the camera gleefully zipping around. The big lizard decimates the factory, and conspiracy nut Bernie Hayes, who works at the Apex facility, gets a look at a round metal object that's unearthed by the attack... could it be a metal eye?

Bernie runs a podcast about Titans, and his number one fan is Madison Russell (Millie Bobbie Brown) who reprises her role from King of Monsters. Alongside high school chum Josh, these three make up the Godzilla trio of humans. Together they are positioned in the film as a comedy triple-act, with Madison keeping her boys in line. They're easily the weakest element of the film, though Josh has a few one-liners I did genuinely laugh at. Bernie is just an irritating stereotype who serves as a gateway for the other two to get them where they're needed.

The far more interesting drama rests with Kong's team of co-stars. Hollow-Earth theorist Nathan Lind (Alexander Skarsgård), who lost his brother on an ill-fated attempt to enter the mystical realm, is convinced to join Apex by owner Walter Simmons and the son of Ishirō Serizawa (who perished rejuvinating Godzilla in King of Monsters), Ren. They want him to relocate Kong to the Hollow Earth and provide the means to do so by way of Hollow Earth Ant-Grav Vehicles (H.E.A.V) which are a throwback to the classic Toho films. Simmons' daughter, Maya (the stunning Eiza González), will oversee Kong's relocation. No word of a lie, as soon as she sauntered onto the screen acting like a supercilious bitch, I knew she was, and I'm quoting my notes here, "Kong Food". I wasn't far off, though her panicky death is a bit sad and pointless.

She does get to see Hollow Earth though, and what an incredible feat of movie wizadry this whole concept is! The psychadellic effects as they pierce of the gravity well in the H.E.A.V's make for a thrilling ride, but when you arrive, it's just marvellous. The sky is another land, just inverted, true to the "centre of the Earth" theme. Kong jumps from one to land on the other upside down! The whole place is crawling with Titans (which Kong finds tasty - I actually felt ill watching him eat the contents of a Titan's head...) and the landscapes are a testament to the VFX team's vivid imaginations. It feels a little disconnected from the rest of the film at first, but it all makes sense in context. Just like an Indiana Jones film, Maya's dastardly scheme to steal the Hollow Earth's power source for Daddy causes chaos, and her fleeing H.E.A.V is caught by Kong as she tries to get away and is crushed for her trouble. I only fixate on her death as she was one of the few humans in this film with any sense of character or purpose, and she now has one of the most pointless heel deaths in cinema.

This is where the film suffers most - not that the acting is bad, but the actors are given so little to work with. They're almost all just cliches, and as soon as you understand that the Monsterverse rarely plays with expectations, you can figure out any given character's fate the second they walk into shot. As such, this side of the film is incredibly predictable and it removes a lot of tension. You know all the baddies will die, and the goodies will all be fine. At least Demián Bichir chews the scenery with his villainous megalomania - he put me in mind of the late Raul Julia's epic turn as M Bison in the Street Fighter movie, a great actor having fun with a stupid role.

Thankfully it's not the humans that we're here for.

So the real attraction is the monster fights, handily split into 3 separate rounds with a super-secret bonus round at the end.

As my colleague Dan has stated in his review at the UK Anime Network, the fights have borrowed heavily from other sources, but unlike Dan I have no real issue with that. Does seeing a battle on open water with the combatants bouncing off boats bother me when I know it's taken from Evangelion? Not really, because Eva doesn't have this spectacle. It's the detail that sells it - watching bodies being sucked out of boats that have been cleaved in two and then dragged underwater is chilling. The helplessness of the humans in the face of two forces of nature duking it out is pure adrenaline (the POV shot of the fighter jet launching with the monsters in the background is inspired), and by the time we get to round 3, I was leaning forward and wincing at some of the blows being landed. The CGI used on Kong and Godzilla imbues both with real character, and that helps create empathy during the fight scenes. Kong looks constantly put-upon, which makes him strangely endearing.

I'm not overly bothered by lack of consistency in physics because I'm watching a giant lizard and a monkey fight on open water. It's ALL stupid. But Dan is a man who requires more sophistication and logic in his films than I do.

If there's one weakness in the whole concept, it's that the central pairing is incredibly uneven. Regardless of how fast Kong moves, or even his magic axe, Godzilla's atomic breath would decimate his hairy ass in seconds. The fight across Hong Kong does show Kong's dexterity, but quite rightly Godzilla just completely overpowers him. As I'm firmly on team Godzilla, I bloody loved it. Keeping Kong as the underdog keeps us on side too, so it's not necessarily a bad thing, but could Kong take on Ghidorah or Rhodan? You just can't imagine him lasting 10 seconds. So for Godzilla fans, watching our guy dominate the final round is a real pleasure. All is as it should be. 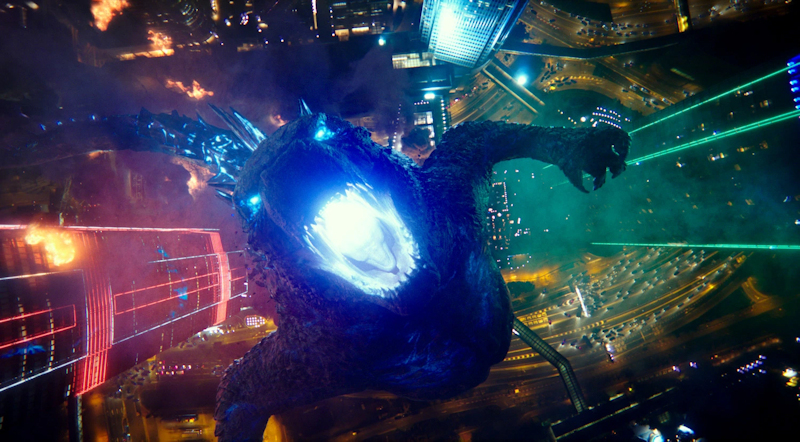 Godzilla isn't going to be outdone on neon lighting by Pacific Rim...

Of course, when the big bad is revealed, it's entirely in keeping with the series for both awesomeness and stupidity. So let's talk Mecha Godzilla.

Firstly, the idea of using Ghidorah's empty skull as a piloting room, taking advantage of the beast's psychic properties, is bonkers x10. With Ghidorah's necks too long to effectively allow communication between the heads, the idea that they're all psychic is movie science genius. To then utilise this as a way to transfer commands from a human to a mecha-titan really stretches credibility, but it SEEMS to make sense in context, so wire that sucker up in a swathe of neon cables and let's make another awesome visual! When Ghidorah's consciousness then takes over Mecha Godzilla, you get a terrific callback to the classic movies AND a grudge match that unites our two combatants - it's all so ridiculous I just sat there grinning like a loony!

This is not a film that's going to make you feel smart.

So let's summarise. True to form, the humans are little more than exposition and useful throwaway excuses for awesome point of view shots. It's a solid cast and they do their best with what they have; I didn't actively dislike any of them (maybe Bernie), but I wasn't that engaged either. This is a film about spectacle, and on that note it delivers. It's a crying shame that lockdown prohibits seeing this in IMAX, which is a must when the cinemas finally reopen. On my 55" TV and using some high quality headphones, it's just big enough to be enjoyable, but to feel the full might of this release, you need the full size kit. Appropriate for a movie about Titans really.

So was it worth the £16 cost of entry? I don't regret jumping in, my setup is decent enough to make it a thrilling watch, but had I been given an option, IMAX would have been my first choice - you just need it for a film of this scale.

In the end I was thoroughly entertained and had a big grin on my face, so no complaints here. Godzilla vs Kong has no pretensions of grandeur, it delivers on it's promises and that's enough for me. Casual fans or the mildly curious should wait for a cheaper means of entry.