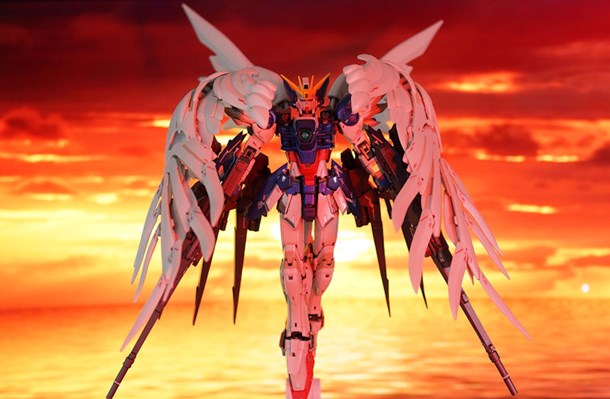 
I'll be honest, Gundam Wing didn't do much for me. I found the characters rather dull and unappealing, possibly due to the regal nature of the antagonists or just the single-minded monotone of Heero Yuy's personality, but even if I didn't care for this iteration of the mighty Gundam franchise, there's really no doubting the impact it had on bringing anime into the West.

The series aired in cut and, crucially, uncut versions on American television, and it became something of a niche sensation. A lot of new fans discovered anime through this show, and for that it has a cultural importance that's undeniable. The signature mecha by Kunio Okawara was pretty damn good too.

By the time we got to Endless Waltz, the feature film that provided a fairly fulsome closure to the series, the Wing Gundam was absolutely established as one of the classic hero mechas of the modern age. Inevitably a feature film demanded an upgrade for Heero's ride, and in this instance the Wing Gundam had one of the most striking makeovers in Gundam history. Not just a sharp upgrade of the core figure by Hajime Katoki, Wing Zero came with seraphim wings. Complete with metallic feathers and a bevvy of weaponry that makes it not only angelic, but full on weapons-grade Rapture. This thing has guns that combine with other guns to create even bigger guns. This is the end of days, mecha style.

Needless to say, the design has been somewhat divisive. I for one embrace the insanity of such a complex setup, mostly because I take it as a sly wink to the show's predecessor, G-Gundam, that featured wacky designs such as a Windmill Gundam, a Sailor Scout Gundam and many more bizarre culturally influenced mecha creations. I think Wing Zero would fit right into that world, but in Gundam Wing proper, it's just very striking.

Seraphim or chicken? You decide!

Ultimately, your take on such an unusual Gundam is going to be a personal one. My own takeaway is that I love how intricate and sharp it looks, something totally unique against a plethora of blue and white Gundam designs crossing generations. Yes, they all have their distinctive styles, but this really stands out. As such, this Fix Figuration version has been something of a grail piece for me, and having received a sizeable year-end bonus, I could finally justify it.

Out of the box the weighty core figure stands slightly larger than the Metal Robot Spirits series, which is to say larger than the classic Fix Figuration figures, and smaller than Metal Build. It's not really going to "fit in" with much, but instead stands as a piece unto itself. Thankfully all the extras mean that giving it a shelf to itself will not leave it feeling empty.

The first thing you'll notice is how intricate everything is, and for good reason - almost every panel can move or slide in some fashion, expanding outwards from the hip-skirts, arm wrests, torso, shoulders and even the ears have swappable, extended parts. It's like the figure can breathe.

The metal skeleton gives it a good heft and nice stiff joints, an essential element given all the parts in the box that need to latch on to the central figure. A backpack, beam sabers, six hands, two sets of wings, twin buster rifle and, in a nice bit of extra fan-service, the shield and Drei Zwerg components that hail from The Glory of the Losers manga. Plug everything in and you get an absolute beast of a unit, full of feathers, guns and spikey armaments. 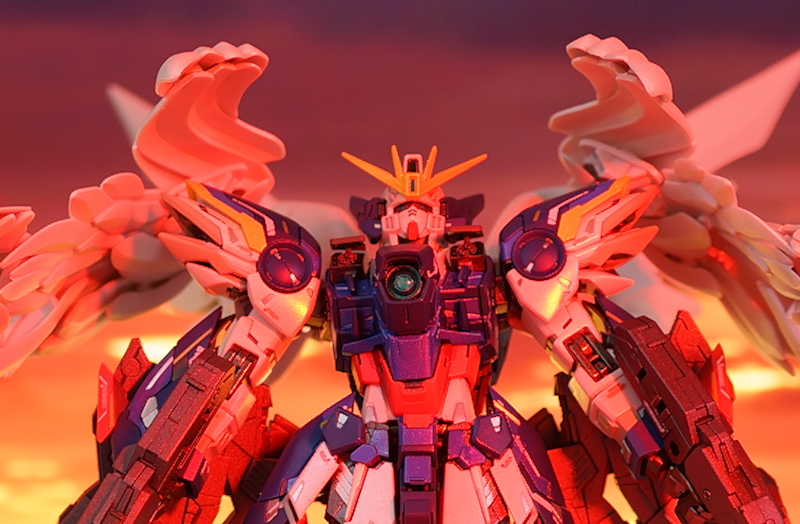 What a moody bastard.

The figure's solid stature and ample parts are backed up by a glorious finish, full on pearlescent white for the main body, with metallic blues and gunmetal greys complimenting the package, with a few drops of yellow and red completing the iconic Gundam colour scheme. Decals across the unit add extra levels of detail and a strong hint of scale, frankly it's on a par with anything from the more expensive (supposedly) Metal Build line.

The unit can transform into its Neo Bird form, but honestly that looks daft as a box of frogs, and I'm not risking that finish with a silly transformation. If that's the mode you're buying this for, I can only admire your passionate insanity.

Finally, we have the stand. A simple white affair with the mecha's details printed at the base, you can extend the arm and adjust the angle to suit your display requirements. In its standard form, you can attach the Wing Zero by the crotch, which is absolutely useless and will wobble precariously in what can only be described as a shockingly poor bit of engineering in an otherwise impeccable package. Alternatively you can attach a tube to the small of the back and pop the stand post into it, which gives a much firmer connection and allows far more maneuverability for the legs, which can even cross without the stand getting in the way. Use this method, your Gundam will look better and sit safely.

So, quite honestly, this is a wonderful toy. If you enjoy Gundam designs on the more extreme side, it's a complete joy, with carefully thought-through engineering and the delightful ability to surprise you with a new pose or mechanism that escaped you the last time you fiddled with it.

The only fly in this particular jar of ointment is the price. Both this and it's "Snow White" variant were heavily scalped on release, with frustrated Japanese fans forced to queue behind thousands of Chinese buyers who had already listed the product on Ebay at hugely inflated prices. Originally retailing for just a touch over £150, it now fetches anything up to £600 if you limit yourself to online auction sites. I managed to bag this one from Mandarake (so I knew I could trust the figure was in good condition) for £350, and for my troubles the tax man added another £80 when it landed on our island. Ouch. 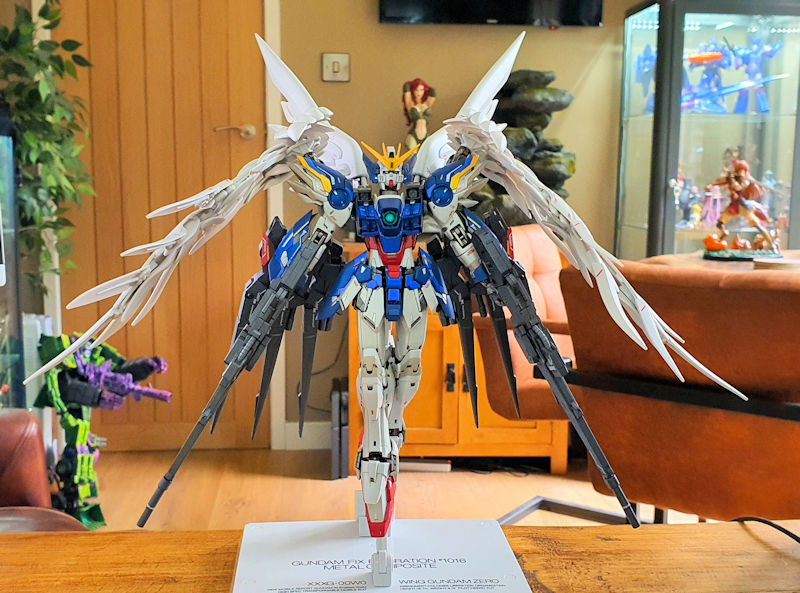 Another treasure for the UK Anime Network/Anime Independent office.

So is it really worth the money? Well, so long as I'm paying a reputable business like Mandarake and not some idiot scalper on Ebay, yes I'd say my enjoyment is equal to the money I've thrown at the figure. I have the satisfaction of owning a grail piece that will probably outlast my Transformers or my anime figures as I grow older. It's an iconic piece that I'm proud to explain to the normals, something spikey and dangerous looking that captures the imagination and commands any shelf it sits on. It'll be the last man standing next to my fully transforming Psycho Pass Dominator pistol, Ghostbusters Neutrino Wand and my signed picture of Peter Falk as Columbo. Some things are simply timeless and part of our wider culture.