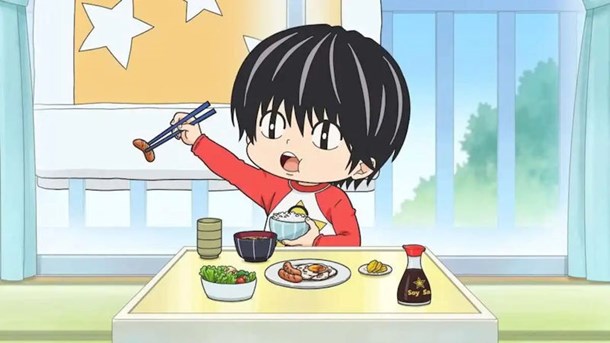 
The title of this Netflix slice-of-life, Kotaru Lives Alone, is a pretty apt description unto itself. The titular kotaru, a 4 year-old who likes to talk like a historical feudal lord, moves into an apartment on his own and becomes the focus of a group of ne'er do well adults who live around him.

One of the surprising things about the first episode is how many characters it manages to successfully introduce. Our main point of view character is failing manga artist Shin Karino who is bemused by the youngster that turns up offering him tissues as a neighbourly gift, but soon finds himself trying to care for the oddball youngster. We're introduced to Mizuki, a hostess, and Tamaru, the gangster-style fashion victim who finds Kotaru adorable, much to the youngsters clear annoyance. It's soon revealed that Tamaru cannot give the gift to his own son, who hates him, and is using Kotaru as a substitute.

I'm not familiar with the source material, a manga by Mami Tsumura which ran in 2015, but having read the synopsis and watched this first episode, it's clear that the simple cartoon style employed belies the complex emotional issues the series is going to deal with. In this first episode alone we have glimpses of abandonment, substance abuse, depression and familial strife, but delivered in such a was as to be sensitive to each topic. Kotaru's pure-hearted and straight-forward approach to helping those around him, especially as he notices things missed by the adults around him, is fascinating to watch.

I have to give full credit to the score by Yūya Mori as well, its very subtle but perfectly suits the tone of the series, being a mix of melancholy and uplifting notes that punctuate the scenes that so few Hollywood musicians seem to manage these days. The other important audio, the voice actors, are excellent in English. Original Japanese is also available, but either will serve you well here.

I am, at heart, drawn to anime by aesthetics, and it's fair to say that Kotaru didn't appeal to me visually. However, the little vignette that played when I hovered over the series was so compelling that I tried the show out (stuck in Covid isolation I have more time available than usual) and I have to say I'm extremely glad I took the plunge. I can already tell I'll be crying over this show at some point, soft bugger that I am when it comes to a series like this. Being the parent of a 2 year old (who was pretending to be a lion this morning), the thought of anyone abandoning a child is just unthinkable to me. Nonetheless I'll be watching all 10 episodes and posting my full thoughts on the UK Anime Network over the next few days.

In the meantime, I'd highly recommend giving this show your attention. The first episode gives you everything you need to know whether the show is for you or not, but I think it'll be hard for most fans of thoughtful narrative and slice-of-life comedy to pass this one by.