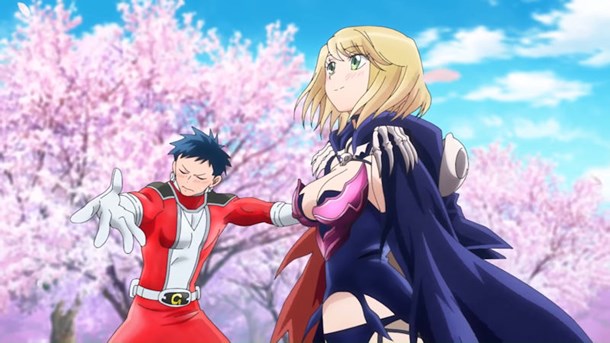 
Ah, fresh anime, it's been a while! I noticed positive vibes on twitter about Crunchyroll's Love After World Domination, and being the sort of romantic fool that loves a good romance between opposing factions (from Romeo & Juliet to Black Arachnia and Silverbolt in Transformers: Beast Wars) this seemed to be right up my alley.

Fudo is the leader of a Power Rangers style Sentai team known as the Gelato 5, a dessert themed super-team(!) that are forever battling a legion of villains bent on world domination. But what would happen when such a noble young man falls in love with his beautiful-but-deadly opponent, the "Reaper Princess". Well, it turns out she's not terribly experienced in love, and agrees to date him when he confesses his love for her, but neither can openly admit to their feelings given their conflict, and so they must conduct their lover's trysts in secret. Cue the ensuing comedy.

Episode one very concisely shows us how the couple met and their early dates, which are absolutely adorable. Fudo doesn't know much outside of pursuing justice, and Desumi (our Reaper Princess) is just a cute girl who loves to bake, change up her perfume and spend time playing with her cat - when she's not trying to take over the world of course.

I love the way the show so successfully apes the Sentai genre - everything from the heroic line-up to the poses and ridiculous attacks, it's a lot of fun to watch. Even the wise old commander is in tow, encouraging our hero in love, ignorant of who young Fudo is actually lusting after. 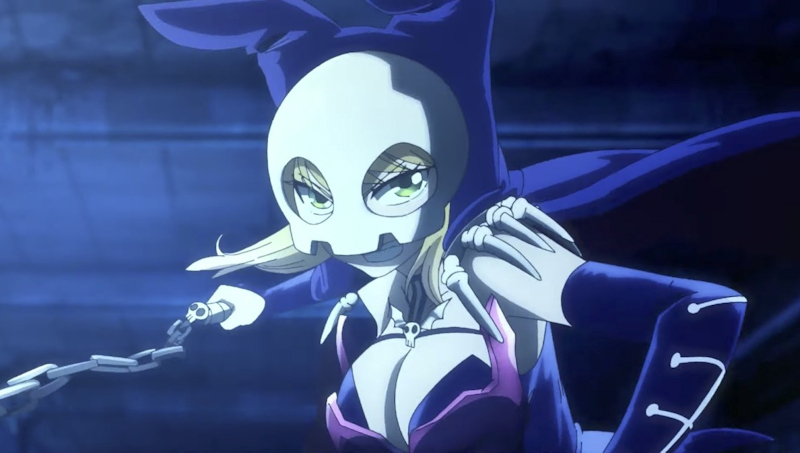 I have to admit I think Beast Wars did it better, with Black Arachnia's sneaky self-interest slowly being eroded as she's unwillingly charmed by Silverbolt's cheesy heroics.

Regardless, any first thoughts article is less a critique and more of a reaction, with a view to just how hooked I am off one episode. I have to say, I really enjoyed this first episode - it spoke to me as a romantic and lover of cheesy theatrics, both of which are in abundance here. The leads are genuinely charming, and I was rooting for them out of the gate - they make such an adorable couple that I really want to see where the drama takes us and at what point allies on both sides start to twig as to what's going on. I want to see more of the villainous Gekko organisation, some of the character designs look fantastic - I'm also curious as to their global goals.

I should also mention that production design is excellent. The direction is smart and fast-paced, with just enough cheesecake to keep your eyes on the screen, and charming vocal performances from the original Japanese cast. I also enjoyed the music throughout, which conveyed that superhero pomp perfectly.

There's bags of potential here, and I'll certainly be firing up the rest of the series to see if Fudo and Desumi can beat the odds and overcome their allegiances to meet in the middle and make their love work.