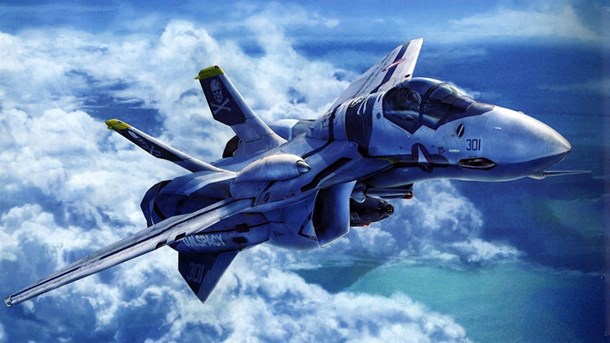 
With the amazing news that Macross is now free to be distributed beyond Japan, along with all the associated merchandise that entails, I thought it might be a bit of fun to do a rundown of what I'd like to see imported - the cream of the Macross crop as it were!

Let's start with the obvious - which series do we want to see in the West? Let's say we're limited to 3, and neither Macross II nor Macross Plus count since they somehow snuck under the fence years ago. What would be THE seminal Macross series we'd want to bring over?

Super Dimensional Fortress Macross
Obviously there's the original. You can't really do Macross without telling the story that started it all. A Blu-Ray remaster, complete with re-created opening, was made available in Japan a few years ago, and since Netflix has shown the original before, it seems like the best fit for a wide audience.

If time isn't a factor, I'd really like to see a retelling a'la Gundam Origins, with modern animation used to retell the original story, perhaps even from a different persepective (Maximillian Jenius would be a good choice here). However they go about it, it's clear that Macross needs to be told for the first time in the West.

The prequel to the original series, with a focus on some key Macross concepts. Zero has some incredible visuals, masterminded by Shoji Kawamori who directed the series. At 5 episodes this is a short and very sharp entry into the franchise that shows Kawamori on top form - You'd never guess it was nearly 20 years old! The series made it's debut in 2002 for the 20th anniversary of the original anime! (God, I feel old..) Additionally, the inclusion of Roy Fokker provides an excellent link to the original series, while the Nome sisters are directly related to one of the main idols of my next pick.

This, for me, is the definitive modern Macross. It takes the concept of humans travelling to new worlds on giant spaceships and extrapolates so many good ideas, awesome music and incredible set-pieces that it's genuinely my favourite Macross. Pacing is also top notch, accompanied by a group of characters that are very compelling. Sheryl Nome is a feisty foil for amateur pilot Alto Saotome, and Ranka Lee is the cute-as-a-button wannabe starlet that serves as a great point-of-view character for the idol life, as well as holding a pivotal role in the story. It was immensely popular on release, and I pick it over the more recent Delta only because I'm limited to three releases and, in my opinion, the pacing and overall story in Frontier is far stronger.

If I were going for an alternate trilogy, you could do Original Series, Macross 7 (though it's a bit poor and very repetitive) and Macross Delta, as each one heavily features the Jenius family.

This is a tricky beast, as rights to music are often held by the music label and not the anime studio, so even with the anime rights settled, the music distribution could be another kettle of fish entirely. However, which Macross has the soundtrack we want to buy?

There's no doubt that the original Macross is a bit dated in this area, but that old-school fans will want access to the soundtrack is a given. When it comes to the rest of the entries in the series however, two stand out.

Macross 7, while probably the weakest link in the show's canon, does have some absolutely stellar music. Blasting rock anthems like Holy Lonely Light and Diamond Calling are incredibly catchy and show the advantage of having a band, rather than a single idol, take the stage. While gentler, more pop friendly songs also feature (Submarine Street, Power to the Dream) it's the rock that, well, rocks this series. Lead singer Nekki Basara is still a bit of a tit in the show though. Yoshiki Fukuyama provides the vocals for Nekki, and Chie Kajiura is on top form as Mylene Jenius.

And then of course there's the mighty May'n and Megumi Nakajima providing music for the two idols, Sheryl and Ranka respectively, from Macross Frontier. Honestly, Frontier got everything right - a gripping story, fantastic animation, great characters and above all, amazing music. The second OP to the series, Lion, is among my all-time favourite pieces of music period - its epic in scope, full of energy and just gets the blood pumping, very handy when playing the games. But I'm getting ahead of myself - enjoy the live performance below for a taste of Deculture!

Yoko Kanno's soundtrack to Macross Plus is genuinely unique (though has been officially released in the UK already) and Delta has its moments, but 7 and Frontier will always be top of my list of Macross music.

Oh, we have a lot to be spoiled with here. There's so much fantastic Macross merchandise out there, all begging for a reissue! If we're talking Valkyrie's, lets get two series over here in an official capacity to really please the fans.

The Bandai Chogokin DX series is the premium Valkyrie for the discerning fan. Fully transformable 1:48 scale with die-cast parts and (certainly in latter releases) great posability. They aren't cheap, costing a minimum of £200 to import, and that's assuming you can get one in the extremely brief periods they tend to be available.  They are worth the hunt though, as the level of detail and presence on the shelf is undeniable.

Slightly cheaper, but no less desirable, is the Hi Metal R series of figures. Coming in at a smaller 1:100 scale and around £100, they're no less impressive for it. Some parts swapping is required to achieve the same results as their larger cousins, but the detail is superb for the scale. The most re-used model is the Valkyrie 1F series, covering with all the main character's seeing a release of their signature rides, but the inclusion of more varied mecha, such as the VF-4 Lightning and the VE-1 Elintseeker, not to mention enemy GLAUG pods, ensure that you can get plenty of variety too. 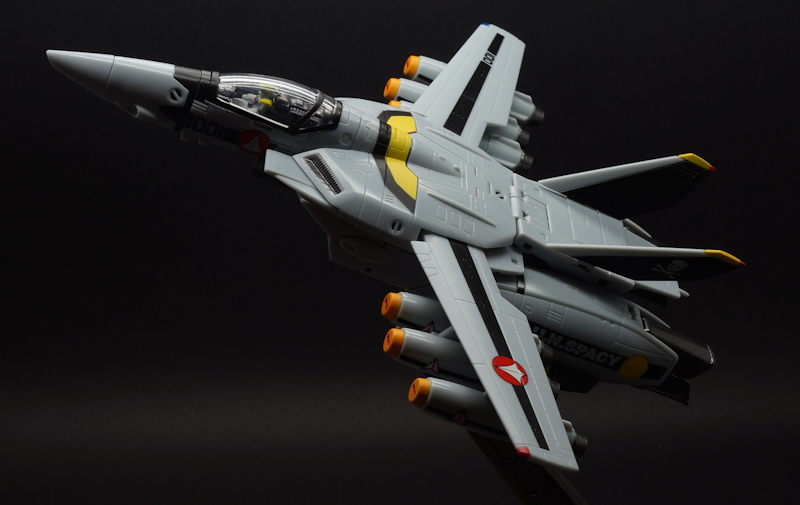 Lastly on the toy front, let's talk the SDF-1 itself. There's so many model kits and versions of this iconic ship at multiple scales that we could be here forever. However, let's take two ends of the spectrum, starting with the 1/3000 scale Arcadia Macross SDF-1 fully transformable figure. The venerable Mr Seb over at the UK Anime Network happens to own one of these beasts, and it is a beauty. There's a standard and premium finish version (with lights) available and it will set you back around £550, but for all that it makes a wonderful centrepiece to any collection. 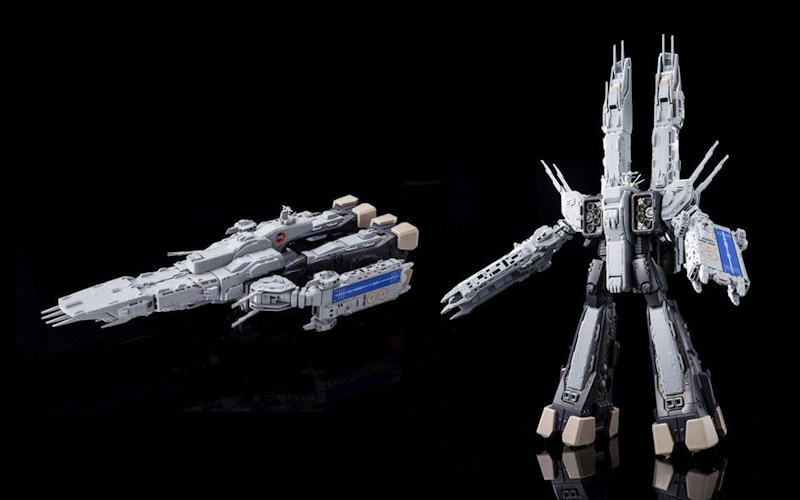 Arcadia likes to make them big and beautiful!

And here's the one I own, the W.H.A.M 1/5000 series Movie Colour Version of the very same Macross. With some lovely painted detail and the tactical advantage of not taking up an entire desk to display, this is a terrific little Macross that only has minor issues with the friction joints that holds everything in place. Mine is nice and tight, but I have seen them degrade into a floppy mess. There's no denying that it makes an excellent display piece for a desk, as well as a top talking point for non-fans who wonder where it comes from!

For the fan with considerably less room to spare!

So that's the series, music and toys done, let's look at one last area that I'd love to see covered - the video games. The PSP and PS Vita have taken huge chunks of my life with the Macross Frontier games (Macross Frontier Triangle being the best of the PSP selection). An HD update of this series would be very welcome. Featuring an expansive roster of Valkyries spanning all the iterations of Macross, it's a terrific third person flight and battle simulator that makes use of all 3 modes your Valkyrie fighter has to offer. Accompanied by full vocal renditions of the various songs from the anime, there's really nothing finer than fighting for humanity while upgrading your weapons, armour and thrusters to take the fight to the enemy. With the possibility of a truly worldwide release, I'd love to see an increased budget and 60fps on PS5. Yummy!

Of course there's so much to Macross that we've barely scratched the surface here. From artbooks to figures, model kits to merchandise, the idea of getting more access to the hitherto closed world of BIG WEST's magnum opus is tantalising. Hopefully you've seen a few cool things here to keep you salivating over the possibilities.

I, for one, shall be preparing some more shelves.