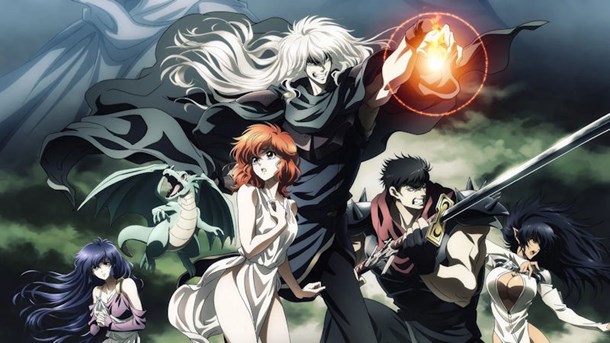 
If anything surprised me about the first episode of Bastard, it's how relatively tame it was. There's nudity, death and gore, certainly, but in a post Goblin Slayer world, it all seemed fairly bland by comparison. I'm certainly not the biggest fan of visceral anime, and the horror genre is something I tend to avoid out of habit, but I braved Bastard and found that it really wasn't as distasteful as I'd feared.

Firstly, let's get to why I actually took a punt on this, despite my gentle nature. Firstly, the Berserk anime proved that you can have an incredibly compelling storyline AND excessive bloody murder working hand in hand. For many, this revelation would have come with Game of Thrones, but we anime types had plenty to go at before George RR Martin had a pop at the genre. Secondly, the adorably 80's aesthetic had me intrigued from the start. The retro future look is pretty fun, and being an admitted aesthetics whore, it pulled me in regardless of any instinctive distaste for violence. Just look at that headline image - it's bloody glorious!

While the anime opens showing the end of civilisation and two godlike opposing forces, I think the point at which I stopped watching through my fingers and openly laughing came when our heroine, Yoko, is told the only way to reincarnate the villainous wizard, Dark Schneider, is to plant a virgin's kiss on a young boy. It's so delightfully twee it just completely undermined the hardcore image the series works so hard at.

Dark Schneider is a total anti-hero in the most traditional vein, you can almost see him sharing drinks with Snake Pliskin. When he's begged for aid, he basically flips the Royals the bird and claims he'll only save Yoko due to her sacrifices for him as Lucien. The fact that she immediately undermines him with a proper scolding adds comedy in a series that I really didn't think would have any, so it's quite jarring to the overall mood.

That's not to say it's in any way bad - quite the opposite, this first episode marks the most promising title from Netflix since Carole & Tuesday, providing sharply animated action with excellent direction from Takaharu Ozaki (Beck, Goblin Slayer) and a suitably atmospheric soundtrack by Yōsuke Kuroda, the genius behind Trigun's magnificent music. Backgrounds are beautifully realised and the big-haired 80's characters absolutely shine when coupled with modern animation. All credit to Liden Films for the production values.

If Bastard has one flaw, it's the very American dub. It's cheesy in the wrong way, though suitably evokes very early anime dubs by being a bit, well, crap. Similar levels of cheese are accomplished in the visuals from time to time, the most notable in this episode being a soldier clubbed into the ceiling and watching his shocked face reflected in a flying drop of blood. Yeah, it's kinda cute, but it's that sort of B-movie directorial flare we really don't need in a scene we're supposed to be taking seriously. Coupled with the awkward teenage angst between Yoko and Lucien, Bastard becomes dangerously close to being juvenile. The lingering shots of breasts, nudity and clearly erect nipples are also worth a smirk or two, but looking at all the promo art, that seems to be order of the day here.

Oh, and you should absolutely watch this subtitled and don't waste your time on the dub - even the monsters sound better!

Taken for what it is then, Bastard is a series that's full of great technical talent that, just occasionally, undermines itself. A throwback to a less PC era, it's all skirts, boobs and blood, which if that tickles your pickle, is fantastic. For me, I had a great time watching the show, enjoying all it's voyeuristic 80's cheese smeared across the screen with gay abandon. When someone says "they don't make 'em like they used to", just chuck this on and watch their eyes glaze over. It's a very guilty pleasure, but it wears it's colours with pride.  Dark Schneider? What a bastard.