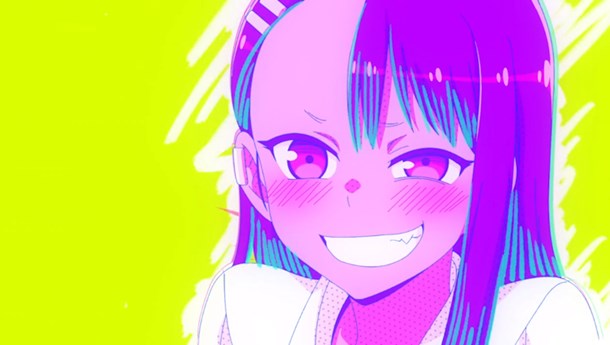 
Based on the hit manga by Nanashi, Don't Toy with me Miss Nagatoro (aka Ijiranaide Nagatoro-san) is the tale of a one young man plagued by the... playful Nagatoro. As "Senpai" (which is how he's referred to for the entire episode) cowers in the library from a trendy group of rowdy girls, a series of mishaps ends up with his home-made manga revealed, to guffaws of mirth from the ferocious females. However, as they leave, one girl stays behind to critique his work in detail, laughing at his blatant self-insertion (which almost seems meta given our lead) and tells him he could never be as cool as his imaginary self. This perceptive, albeit cruel, insight causes the young man to cry in shame.

Latching on to the poor young man, Nagatoro ruthlessly pokes fun at him for the duration of the episode. She seems to take on the role of Sadodere, a character type that takes pleasure from sadistic torture of their romantic interest. However, even in this openinng episode, there are signs that Nagatoro isn't all she seems.

When he returns her handkerchief the following day, she seems genuinely taken aback that he's returning her gift, but then takes it upon herself to pounce again, this time insisting he draws her for his art club project. It's the perfect way to ensure she's seen by him, but noticing that he's deliberately left out the finer details of her thighs, she goes on the offensive - cue senpai's second round of tears in as many days. The fact that she then follows him home, insists on telling him her name and declaring that they should get to know one another, she also (coincidentally of course) makes sure he's actually not too upset by her antics and gets home okay.

We may only be one episode in for the sake of this article, but already the maidenly blush that lays across Nagatoro's cheeks as she berates her senpai betrays her true feelings.

Nagatoro has incited a lot of discussion online, some hating on the character for what is perceived as her narcissistic bullying, but that misses a lot of the subtlety of the story. The manga often book-ends a chapter with a lone shot of Nagatoro embarrassed that she might have let her mask slip, or wondering if she pushed too far. It's important also to note that her position as a first year is indicative of her youthful immaturity. Were the roles reversed, perhaps our hero would be pulling her pigtails. Nagatoro is annoying and bratty, but that's becuase she has no idea how to show her emotions in a mature way - understand that and the series becomes not only cringe-comedy of the highest caliber, but touching in the right places too. 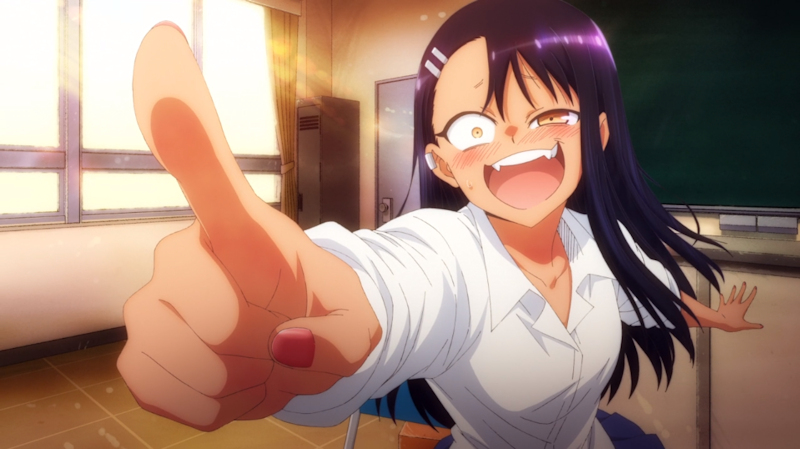 There's no doubt that this is a gorgeous series

Ultimately, if you don't like the character, the anime won't be changing your mind, even with its crisp lines and glorious lighting. The animation might be fairly standard for a modern anime, but every frame is gorgeous. Lens flare, detailed character models and dynamic angles, it's just about the prettiest anime I've seen this year! I'm thrilled that the manga I've been reading the second it's delivered through the postbox has been given so much love - a far cry from Way of the House Husband on Netflix, which has been largely panned as a slideshow. Bullet dodged there then!

As always in my First Thoughts pieces, I have to answer the question of whether or not this single slice of anime can stand on its own and encourage future viewings. Anyone who has already taken against the character won't find anything here to change their mind, but for those of us already invested in the couple, this is (so far) a faithful retelling of the manga with some of the sharpest and most attractive freeze frames I've seen in some time. Personally I love it, and eagerly await some decent merchandise featuring Miss Nagatoro as she irritates and entices new fans to the fold.

Don't Toy With Me Miss Nagatoro is being released weekly, subtitles, on Crunchyroll.